C# or c sharp is based on OOPs fundamentals. It was invented by Microsoft and very much similar to Java. It is used in almost all framework laid down in .Net. If you going to start programming in c#.

First of all you need to create Microsoft developer account, and download Visual Studio IDEfor free for students and individual developers.

To learn C# practically from the beginning until you become a full stack .net developer you must be on Pluralsight.

Pluralsight are the official training partners of Microsoft employees, they are specialized in Microsoft programming languages and networking systems.

The subscription cost is $29 per month, and they offer a free one month trial. The subscribtion gives you access to thousands of courses and tutorials.

They also provide certificates, and if you have needed a professional consultancy for a programming project you are working on they would be there for you, to help you solving all issues you are facing. You will never be alone until you reach your goal. 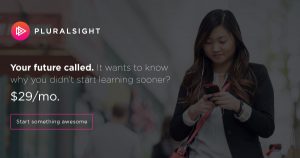